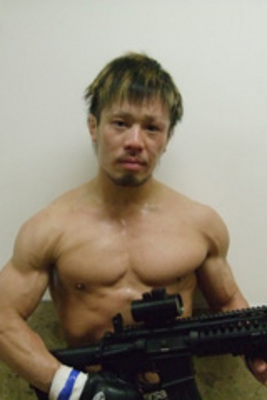 Kosuke Suzuki is a Japanese MMA fighter best known by his Shooto nickname "Rambo" Kosuke. He was born on March 5, 1984 in Yachiyo, Chiba, Japan.  Rambo Kosuke trains and fights out of the Chiba Paraestra gym.

Rambo Kosuke began his mixed martial arts career fighting in the amateur circuit when he competed in various Shooto amateur tournaments throughout Japan. His first Shooto MMA amateur tournament took place on December 21, 2008 where he made it all the ways to the finals finishing 2 of his opponents on the way there, 1 by submission and 1 by KO before losing to submission in the finals. He then competed in 2 more Shooto amateur MMA tournaments, winning 1 on June 21, 2009 and losing in the finals of another tournament on September 27, 2009.

He made his professional MMA debut months after battling Yuya "Cider" Kaneuchi to a unanimous draw in the round of 32 of the Shooto 2010 Rookie tournament.

Since winning the tournament, Rambo Kosuke has gone on a mixed set of results throughout his MMA career.

Rambo Kosuke is mainly known for his character which is inspired by the main character of the Rambo movie. He wears camouflage trunks and bandanna while carrying a fake gun to the ring. Another of his main characteristics is his blonde hair which is one of his physical features that he's identified by fans.