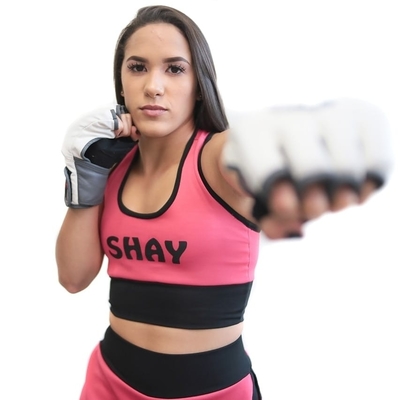 Shay McQueen is the pseudonym used by Keismilyn Shayene, 21, born in the city of Fazenda Rio Grande in the state of Paraná. He had two amateur MMA fights winning all of them. She has only two fights as a professional, a victory over Queila Melo, in July 2019, at Champions Land, a fights event that took place in the city of Campo Largo, in the Paraná state. Shay won the judges' decision after three rounds of fighting. Queila, another novice athlete, had also fought only once, with victory, and suffered her first setback for Shay. Last year he lost to the experienced athlete from Santa Catarina, Silvania Monteiro, in the Terral Fight 8 event, also held in Campo Largo. There is a scheduled fight against Elisandra Ferreira in the Nação Cyborg 8 event that will be held in the city of Piraquara in the state of Paraná.