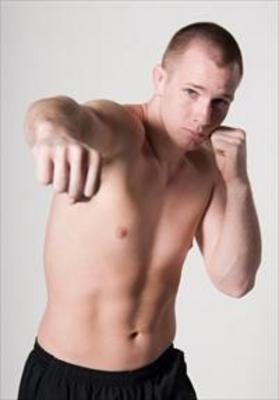 Hans Stringer is ineligible for regional rankings due to inactivity.
Fighters must have at least one completed MMA bout in the past two years to be ranked.

Apart from his youth and his record, Stringer is also a part of the resurgent Blackzilian training camp, working alongside Eddie "The Silent Assassin" Alvarez, "Sugar" Rashad Evans, Anthony "Rumble" Johnson and Vitor "The Phenom" Belfort (among many others).

Despite only being 26 years of age, he's already 8 years in to his career and has fought the likes of Attila "Pumukli" Vegh, Krzysztof "Model" Kulak, Dion "Soldier" Staring and Igor Araujo.  Apart from his recent draw, Stringer has won his last four fights, all against regional European competition.

Stringer is somewhat of a controlling grinder. He has decent, but not excellent boxing skills which largely serves as his avenue to get the fight in to the clinch.  Once in the clinch his first instinct is to look for the takedown, usually dropping for the double or single leg, but mixing in body lock throws and trips if his initial attempts are stifled.

He's not an especially adept takedown artist and mostly tries to out hulk his competition. He looks like he's gotten stronger recently which helps with that, but still isn't a great replacement for skill.  He has some decent clinch knees and dirty boxing, but those tools are mostly applied to back opponents into the cage for grinding position.  On the ground he's solid. He has decent ground and pound and a solid knowledge of position and transitional grappling. He's not electric, but he probably won't be easily handled either, if the fight hits the mat.

Dutch light heavyweight Hans Stringer was signed by the UFC in Feb 2014.  Stringer will make his way to the UFC in one of the strangest methods in recent memory.  Stringer enters the UFC after his most recent performance at WSOF 6 against Francisco "Kiko" France in which he earned a unanimous decision draw. The draw was due to a point taken for multiple groin shots from Stringer on his opponent in a fight that he otherwise lead to a 29-28 scorecard, causing the judges to award 28-28s across the board.  It's the first time in a long time that a UFC fighter got a contract without winning his most recent fight (excluding TUF contestants).

Stringer made his UFC debut against Francimar Barroso at UFC Fight Night 38: Shogun vs. Henderson 2, on March 23 and won by split decision.