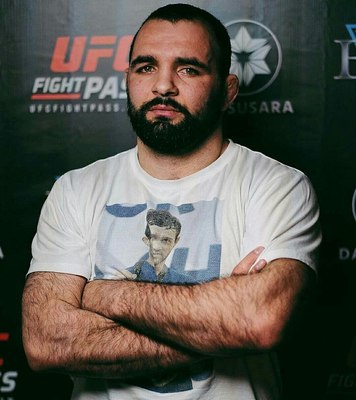 Hailing from North Ossetia, Russia, Rustam has a background in wrestling. Growing up in the Caucasian-Steppe region, Rustam like most young boys found his passion in combat sports, specifically freestyle wrestling. In the last 50+ years North Ossetia has produced over 10 Olympic medalists in wrestling and countless other masters in the discipline. ( competing under the U.S.S.R / then Russian flag )

The quality of training and competition is high, as well as numbers in participation, meaning not everyone makes the cut. Failing to make the international squad for wresting ( Russian national team ), Rustam looked elsewhere to apply talent, discovering submission grappling and MMA.

After he graduated university, he connected with Murat Keshtov, founder of K-Dojo,  he applied to travel to the U.S,  so he could train at Keshtov's stable of fighters. He then also began training and competing extensively in submission grappling rules tournaments, culminating in a bronze at the world renowned ADCC tournament in 2015. Rustam has received notoriety in the sub-grappling / NOGI world, for dominating many jiu-jitsu purists in their format, while only coming from a standard freestyle-wrestling background himself, having never trained heavily in submission rules until much later in life. ( his style has garnered fame for having a near impenetrable defense )

Having already built an elite level of skill in grappling , in multiple styles and competitively, his focus now seems switched to apply these skills in MMA competition. ( he holds a notable victory over former UFC champion Luke Rockhold in a 2010 "Grappler's Quest" event , and also made it to the final of the prestigious "EBI 6" event ( Eddie Bravo Invitational ) losing out to grappling phenom Gordon Ryan in a hard fought bout )