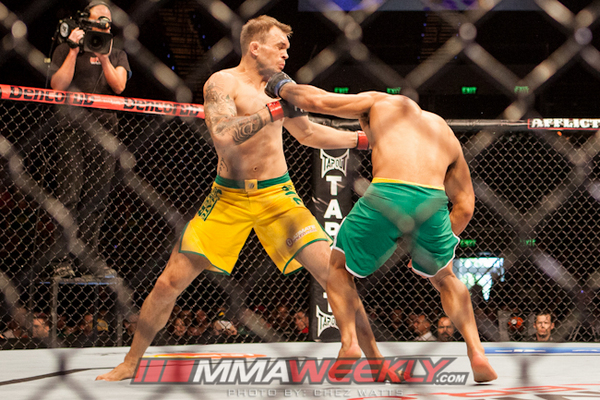 TUF: The Smashes cast member Benny 'Blanco' Alloway started off his MMA career by fighting mainly in his homeland of Australia. After he tallied a 12-3 professional record, Alloway would get the opportunity to be a member of The Ultimate Fighter: The Smashes. Alloway would get to the quarterfinal, but would drop a split decision to eventual finalist Brad Scott.

However, Alloway would not gain notoriety until he received the opportunity to fight UFC on FX 6, taking place in Australia, where he would fight Manuel Rodriguez. After being taken down a few times early, Alloway would surprise many when he caught Rodriguez shooting for a takedown, knocking him out with a front kick. He would follow up with punches, and ended the fight late in round one. He would also earn a 'Knockout of the Night' bonus for his efforts. Most recently, Alloway lost a unanimous decision to UFC newcomer Ryan LaFlare in Stockholm, Sweden at UFC on Fuel TV 9.

Episode 1 Alloway def. Valentino Petrescu by TKO (Punches) at 0:42 of Round 2