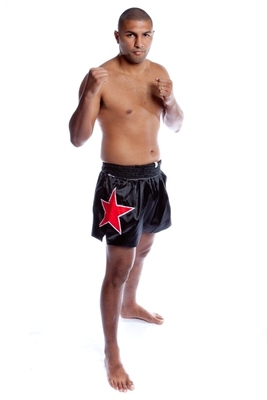 Silva first began  martial arts at "Combat Sports Gym" in São Paulo, Brazil when he was 12. Over the years he would build a reputation domestically and internationally, known for a technical and fan-friendly style. In 2007, he was invited to the renowned "Chakuriki Dojo" in Netherlands. As well as training and improving technically at the gym, his main focus was to serve as a sparring partner for legendary fighter Peter Aerts.

Following his fight against Badr Hari, Silva decided to return to Brazil. He spends his time there training with 'Team Nogueira' and also with Brazilian Vale-Tudo legend Pedro Rizzo.

Under the "Glory Kickboxing" banner he is a veteran of 15 contests, going 7-9 within the promotion, and has been a promotional mainstay since "Glory 2 : Brussels", his most recent outing for the promotion being at "Glory 41 : Holland", where he was a contender tournament runner up for his 2nd time. Overall his pro-Kickboxing record stands at 42 - 17 with 27 victories by ko/tko.

His nickname of "Braddock", is inspired by the character 'Col. James Braddock' from the movie "Missing in Action", starring Chuck Norris.