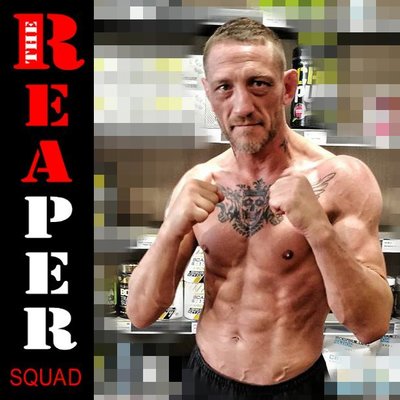 Christophe Rea is ineligible for regional rankings due to inactivity.
Fighters must have at least one completed MMA bout in the past two years to be ranked.

Christophe 'The Reaper' REA is a French fighter.
Now head coach of 'The Reaper Squad', he started to fight back in 1995.
He earned a decent 22-2-1 amateur record before retiring in 2001.
1997: Golden Belts winner
1998: Pankido French cup winner, Pankido French tournament winner
1999: Golden Belts winner, Pankido French cup winner, Pankido French tournament winner, best Pankido fighter of the year
2000: Golden Belts winner, Pankido French cup winner
Away from the mats between 2001 and 2006, he restarted to train at the end of 2006.
He quickly became the head coach of the local club (Fight Club Occitan), and started to prepare some fighters for their firsts 'MMA' bouts.
Good results happening, the club grown fast, and that was logical for the team to cross the borders in 2010 to fight in England. Team 'Reaper Squad' was born...
For their firsts international fights, the team won the amateur European team belt at MMA Total combat 35, against an English selection.
The Reaper Squad became legit, and team members fought around the UK with some pretty good results, including some more titles.
Thinking of fighting again, Christophe signed a pro fight in Cage Conflict in 2012, against David Faulkner (TUF), but unfortunately injured himself a couple of weeks before the fight.
Idea of coming back was still there, and the return finally happened in march 2016.
Leo Alderman, promoter of the Lion Fighting Championship (England) matched him against Jason Forssell (Denmark) at LFC 7, and the Frenchman won by tko in the 1st round:
https://www.youtube.com/watch?v=9u2-yKTXaJE
This good performance opened him the doors of the Golden Belts Championship (France), where he used to fight younger (1997, 1999, 2000).
Middleweight title was vacant, and Christophe has the opportunity to fight for the world title in november 2016.
His opponent was Alvaro Linares (Spain champion the year before).
'The Reaper' won again in the 1st round (KO), and put the belt around his waist at nearly 44.
Still motivated by big challenges, he accepted to meet Konrad Iwanowski (4-1 at the moment) in the cage at Clan Wars 27 (Ireland) in march 2017.
Iwanowski kept his belt, by defeating Christophe via tko (doctor stoppage between round 1 & 2)
https://www.youtube.com/watch?v=3m3mmUV3Krs&t=9s
'The Reaper' slowly recovered from the knee surgery he had in june 2017, went back to training seriously at the end of summer, and accepted to fight again in the Golden Belts, as he did the year before, again for the world title, but a weight class lower (-80 kilos).
Opposed to the Italian Luca Ronchetti, BJJ specialist, Christophe won via submission (triangle) in the 2nd round.

The violent striking game of Ignacio Capella pushed 'The Reaper' to his limits, and a devastating combo, ended by a low kick, earned the Spanish guy the victory in the second round.

Now 45, Christophe is waiting for a last fight in MMA.
Maybe in the UK...