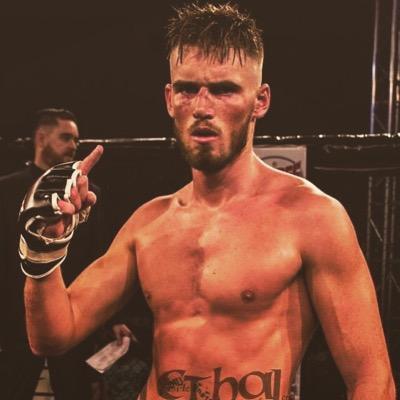 
Cian Cowley began his martial arts journey at the age of 5. He was first introduced to kickboxing by his father Dave at the family run gym in Stillorgan. At the age of 12 Cian discovered Muay Thai and fell in love with the sport. He began under the tutelage of Mike Dockery in Warriors gym. Cians approach and dedication to training ensured he progressed quickly and after 6 months he had his first bout. In the years that followed Cian amassed a total of 35 amateur fights before making the decision to turn professional at the age of 16.

Over the next 7 years Cian fought in 54 professional bouts and has numerous accolades to his name, becoming the ISKA Irish 70KG Muay Thai, Irish ISKA K1 Champion, the Golden Belt 4 Nations Muay Thai Champion and most recently his best accolade to date, the Irish Caged Muay Thai Champion at 70Kg. He has fought all over Europe, Thailand and the USA. This experience has instilled a wealth of knowledge far beyond his years in Cian.

Now aged 21 Cian has taken over as head coach at Warriors gym and hopes to pass on the knowledge and skills he has learned in the family atmosphere of the gym he was raised. Cian has been involved with Warriors for the past ten years. In that time he became one of the best Thai boxing fighters in Ireland and recently decided to pursue a career in MMA. He told FightStorePROi what the gym means to him, “I was always involved in martial arts because my dad got me into boxing and kickboxing in other gyms but Warriors was my first home when I started. It was my club and who I represented, I never mixed and matched with any other clubs. For the last ten years it’s been my club. The longest I’ve ever been away is when I’ve gone to Thailand to train. I’m always in and out of the gym, it’s like a religion to me. My whole life revolves around Warriors gym and Thai boxing. People say that the gym is their second home but this genuinely is my second home because it’s all I’ve known for the last ten years. I dropped everything for Warriors gym and always put it first before everything else.”

This level of dedication is clear when he admits that he’s ‘turned down endless amounts of opportunities because I put this gym first.’ “I’ve had offers of full-time work running gyms in America and Australia but that thought wouldn’t even come into my mind. That’s how much Warriors means to me,” he admitted.

Many had questioned whether Cian would be able to run the gym when he was handed the keys by his trainer, Mike Dockery, but now the two men look back and ‘laugh about it’. “I never expected it. I never had a plan that in a few years I’d take over Warriors; that was never mentioned by anyone,” he said. Mike took a chance on Cian but he had ‘faith’ in him. “Back then most people did knock it because they probably said Mike was mad giving the gym to a nineteen year old. Everyone asked questions about him giving it to a young lad, they didn’t think I’d know how to run it and organise fighters but Mike had faith in me and now when we talk about it we laugh about it. He was the only one the actually believed that I could do it but know all those doubters have been proved wrong. The gym has gone from strength to strength,”says Cian.

Since the takeover Warriors has grown under Cian’s tutelage and he has been happy with the progress achieved. “When Mike had the gym he had a full time job and a wife and kids at home so it was very hard for him to juggle all that together while trying to push all his fighters to the top and bring in new people to the gym. When I took over I had no job or responsibilities so I could put all my work into this project. I was able to coach all the classes and organise the fights so within the first year I was organising all the trips away and I also had the time to go away with fighters to England and abroad,” admits Cowley.

Looking around the gym it’s not hard to see how far they’ve come in a small amount of time. Cian points towards a wall full of belts which is testament to his dedication in coaching. “We’ve 17 champions now and that’s gone from just me and Karl McCallig as Mike’s champions. We were his first two champions but the work he put into us to get the belts was huge dedication, he put years of work into us to get them and since then we’ve drove this club forwards. Now we have champion after champion coming through and I would consider Warriors gym the best stand-up gym in the country at the moment in terms of fighters. All the other gyms are great in their own way but I think for stand-up, K1 and Muay Thai, Warriors is one of the highest level gyms in the country,” said Cian proudly.