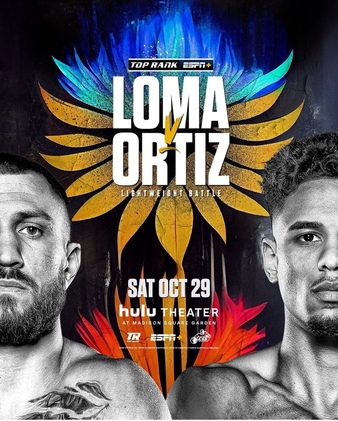 Ortiz is a good prospect but Loma won't struggle to dec him IMO. Stoppage wouldn't shock me either. I haven't forgotten how much hurt Adorno put on Ortiz and Loma is 10x as good as he is. It will look like Rigo vs Loma IMO. Basically Ortiz looking pretty bamboozeled by pivot/sliding counters and double-ups. Especially the pivot.

Not only Loma does this, Usyk does it also. I guess it's a Ukranian-born thing. Basically he will either throw a short barrage or a hook or feint a hook to get his opponent to shell and then step laterlally to their lead foot which gets him side-on to guard where he can land something good before his opponent can adjust to the positional change.

It's not a super-complicated trick but it's a ******* good one, and I suppose it takes thousands of hours training it to master. Everybody can sing but not everybody is beyonce. Thing is, unless his opponent has equally good footwork literally relative to adjusting/countering it..well, they're **** out of luck, which is why Rigo was made to look ridiculous by Loma. Dealing with it just wasn't in his wheelhouse.

It's not going to be in Ortiz's either.

usyk does this because they are both trained by Anatoly Lomachenko Vasyls Father, it is very common in eastern europe and germany tho so i guess it could be based off style

Man im Hyped about this fight card 3 guys i really like to watch. Robeisy Ramirez in my opinion is a future champ he took on 22-0 Abraham Nova when he only had 10 pro fights which happens rarley ill take him via decision. But ill watch some tape of his opponent
Man Loma vs Ortiz is such a hard fight to watch for me Loma is one of my favorites but ortiz is a prospect which i first saw against Jamel herring. I like both but i think Loma is going to win via UD

Tapology members can make predictions for upcoming MMA & Boxing fights. Lomachenko vs. Ortiz is still open for picks to be entered. Create an account to make your predictions.