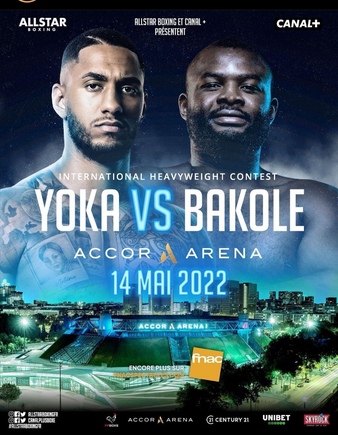 Yoka vs. Bakole
"The official Tapology discussion thread for the event!" (3 months)

Did they really????
I was watching but the scores were announced in French and I just assumed that it was Unanimous.
Boxing judges are wild!!!

Yeah, it was scored a majority decision. Given the fight was in France, of course one of them was going to give the hometown favoritism, but in this case it’s ridiculous. Yoka won 2 rounds at best and he still lost 2 rounds 10-8 as he got dropped in 2 rounds. At least they still got the result right overall and Bakole got the win.

I guess I should know better than to assume anything when it comes to boxing judges!!!

At least the right man won

Tapology members can make predictions for upcoming MMA & Boxing fights. Yoka vs. Bakole is closed for new predictions. 94 total members made predictions on this event, breaking down as follows below.

Leaderboard of the best predictions by member: Yoka vs. Bakole Leaderboard