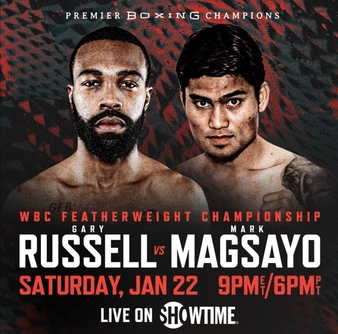 Horrible showing from both men. Russell Jr should've postponed if his lead hand was in that bad of shape he couldn't throw it at all and Magsayo for the life of him couldn't pivot or use any footwork to get to the weak side of Russell when it became clear his hand was completely compromised. Know it's easier side than done against someone with Russell's movement but there was no attempt of. Feels like Roach and team skipped a few steps with his training.

The compubox stats were wildly inaccurate, there was a moment in the 7th where Russell clearly evades a whole flurry and lands two beautiful counters only for compubox to record a hit for Magasayo and nothing for Russell.

By the end I had Russell by 115-113. Magasayo started strong and I had them tied 3-3 going into the 7th but by the mid point Russell was completely taking over before fading at the Championship rounds. Close fight but I didn't think Magasayo deserved the nod. Russell defended his belt with one hand, and Magasayo maybe the worst Featherweight Champion I've seen since Kid Galahad.

Great poster for the event. One of the better ones I've seen in recent times.

Should have known better than to pick him. Long lay off, missed weight, talking about injuries, trained himself, family issues, damn how many red flags did I need?

How often do fighters talk about their injuries before the fight? After the fight yes, but before? Damn, he was making excuses before he stepped into the ring. He knew he was going to lose.

So annoyed at myself for not thinking this through. Lesson learned. Did no damage to my wallet per se as my parlays with him in it had crashed and burned anyway due to Ranoni Barcelos and Kay Hansen in the UFC.

Only reason I still picked him was because Mark was rubbish, and he was and still almost lost against an injured unmotivated fighter. What a S-storm

Tapology members can make predictions for upcoming MMA & Boxing fights. Russell Jr. vs. Magsayo is closed for new predictions. 141 total members made predictions on this event, breaking down as follows below.

Leaderboard of the best predictions by member: Russell Jr. vs. Magsayo Leaderboard