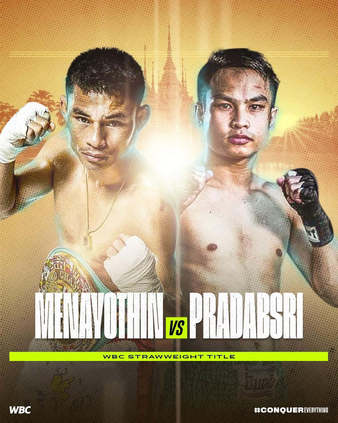 Menayothin vs. Pradabsri
"The official Tapology discussion thread for the event!" (7 months, 1 week)

The GOAT is Dead, Long live the GOAT!!!!

Upset of the year!  The greatest win streak in all of combat sports has been ended!!!!
Floyd is celebrating wildly somewhere.
Unbelievable scenes in Thailand. Again, the GOAT has fallen. Lamb chops are being served in Nakhon Ratchasima!!!

The champion took the center of the ring, boxed with a jab, but forgot to break the distance after the attack, which the challenger constantly used - he brightly countered with a left hook on the body. Nice starting round from Pradabsri - he threw up his hands victoriously after the bell.

Menayotin increased the speed and pace of the fight and immediately took possession of a tangible advantage - he shook his opponent several times, confused him with combination work and an excellent arsenal of strikes. In response, Panya amusingly cut the air with his fists, fell over to flop, and after the gong he raised his hands again just in case.

The challenger struck suspiciously often (by accident?) Below the belt, for which he received a comment from the referee - so far without penalty points. Obviously, raising his hands victoriously after each round is part of his battle plan. Pradabsri's punches were much heavier, and Menayotin acted much more technically and varied. The problem for the senior champion was the need to periodically take breaks - it was lucky that the challenger worked as number two.

Realizing that the fight was close, Menayotin increased the density of the fight several times - the fighters from time to time pleased the fans with the brightest swing at the middle distance. The challenger's blows to the body began to take their toll. After the 8th round, the judges unanimously took Pradabrsi ahead - three times 75-77. Controversial ...

Menayotin still increased the density of the fight, but it did not look very effective, since he could not maintain a high tempo for the entire round - he often failed the second half of three minutes. The fight went all the way and turned out to be just excellent!

We are waiting for the verdict of the judges. Sensation? A new champion?

US boxing legend Floyd Mayweather, who retired with a 50-0 record, can sleep well!

Pradabsri upsets Moonsri with a close unanimous (3 x 115-113) decision and already makes me loose my weekend's betting ticket :( Video of the fight is available on asianboxing.info page in videos section.

Tapology members can make predictions for upcoming MMA & Boxing fights. Menayothin vs. Pradabsri is closed for new predictions. 73 total members made predictions on this event, breaking down as follows below.

Leaderboard of the best predictions by member: Menayothin vs. Pradabsri Leaderboard