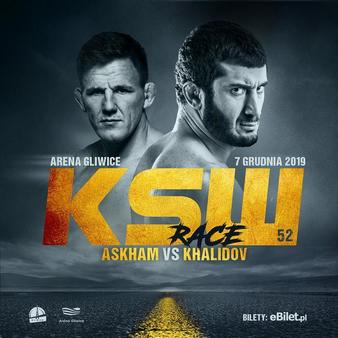 @Tepid yeah my bad wrong thread comment was meant for something else.

Askham vs. Khalidov
Scott Askham, TKO, R3
Khalidov is likely Polands greatest ever Mixed Martial Artist. He never competed in the UFC though there were a few offers. He chose to stay in Poland with KSW where he ruled 185 for nearly 10 years! His last 2 fights vs 205 Champ Narkun were great, the 1st match up in particular was an all time great fight that most MMA fans don't know about! Even though most people in the US never pay too much attention to KSW, in Poland it is HUGE!!! They sell out stadiums and their Champions are treated as sporting superstars! It's pretty cool to see how the Polish people and media treat the fighters. Anyway, Khalidov was retired, not sure why he came back? There is a dodgy story going about involving criminal activity! I haven't looked into it much so I won't comment. But, forgetting all that, coming out of retirement to take on Scott Askham may look like a straightforward way to come back in and regain his old title. But, Scott Askham is a much changed fighter from the guy who fought in the UFC. Askham has turned into a Muay Thai wrecking machine with, more importantly I feel, new and improved takedown defence. He too was involved in a Fight nof the Year candidate recently vs Michal Materla, look it up if you get the chance it was WILD!!! I do like Khalidov and it would be good to see him get his belt back but I can't help but think he shouldv'e taken 1 fight to prepare himself for what Askham presents. Most 40 year olds who come out of retirement don't end up with the fairytale and I see here being no different, late TKO by Askham, probably with some sort of kick, either a straight kick to the head KO or a crippling kick to the body followed up with GNP

Janikowski vs. Kołecki
Damian Janikowski, DEC
Kolecki is 1 of KSW's wierd collection of Heavyweights that includeds World Strongmen, Olympic Lifters, Rappers and other assorted Juicy Juicy lads!!! Kolecki was an Olympic lifter, he won his headline fight with Pudzia, but only because Pudzia's Ligament snapped during the fight! Janikowski is an Olympian, I think wrestling, maybe Judo? He usually competes at 185 so I thought he'd be the smaller man, but looking at the weigh in results he is nearly 10lb heavier than Kolecki. Hmmmm, think he has had Juicy Training Camp!!!! janikowski is the more skilled guy but I'm not sure because he has a habit of winning fights right up until he takes a shot and gets KO'd!!! I'm not a fan of the big weight gain either but I'm gonna put my faith in him once again in the hope that he avoids the big shot and doesn't gas out too hard and throw the fight away!

Owczarz vs. Rola
Aleksandra Rola, DEC
This could be a sneaky good fight! I still remember the beating Rola put on poor Cat Costigan at the past KSW show! That memory has swung my pick in her favour

Parnasse vs. Buchinger
Salahdine Parnasse, DEC
Parnasse is surely UFC bound very soon. Especialy with MMA becoming legal in France any time now and the UFC rumoured to be looking at a Paris show with Big Frank and Cyrille Gane the hardest punching and best prospect in the Heavyweight division. Adding Parnasse to that card makes sense. Parnasse is a tremendous talent, I really think he could be a top 10 UFC fighter possibly even title challenger, he is that good! Buchinger is 1 of the best veterans on the European MMA scene, he is seemingly rolled out whenever there is an up n coming talent in and around 145, 155. He is the acid test to see whether or not a guy is ready for the UFC. Most famously McGregor faced him in his final Cage Warriors bout. But others include Stevie Ray, Frodo Khasbulaev, Akirra Corisanni, Mansour Banrnoui(another outstanding French prospect!). Parnasse should have too much for him as he is well rounded. I doubt Parnasse hets the finish as Buchinger is tough AF!

Szulakowski vs. Musaev
Grzegorz Szulakowski, DEC
I think this fight will be closer than the picks suggest. Musaev is good, record is impressive but so to is Szulakowski's, losing his last 2 to Champ Gamrot and the guy who is meant to be next up at 155 is no reason to write the guy off. Yeah, thats it I'm picking him!

Włodarek vs. Marović
Michał Włodarek, TKO, R1
Wlodarek is a prime example of a KSW Heavyweight, Skinhead, Tatted up and EXTRA JUICY!!!!

Scott is about to get that ass

Tapology members can make predictions for upcoming MMA & Boxing fights. KSW 52 is closed for new predictions. 275 total members made predictions on this event, breaking down as follows below.

Leaderboard of the best predictions by member: KSW 52 Leaderboard