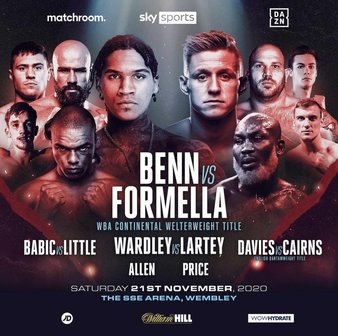 Benn vs. Formella
"The official Tapology discussion thread for the event!" (4 months, 1 week)

Formella has no quit in him, starting to make these rounds tougher for Benn. Benn seeming to gas a bit, still ahead though.

Can't believe Formella lasted til the end there!! Not sure taking all that punishment was worth the moral victory but man's a fighter so can't expect him to quit.
Said it earlier and I'll say it again, Connor Benn looked very very good.  I did think he was gassing a little in the 7th/8th but he came back on.  Still, he is a little hittable so a big puncher could cause him trouble. But the movement, jab and punch selection was all on point and much improved

Liking the promo Benns dropping in his post fight interview!!
Bring on Josh Kelly!!! If he beats Avanesyan that is, and that's a BIG IF for me, not convinced by Kelly.
Anyway, onwards and upwards Connor!