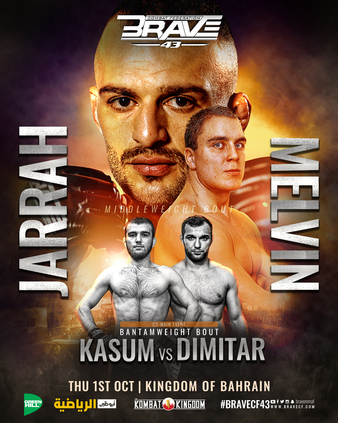 Great fights. Nice chatting with ya over on Fite.

The Co-Main Event and Main Event Results from the Brave CF 43 Card in Bahrain were as follows:-

Kasum Kasumov Won by Submission in Round No. 1 against Dimitar Kostov and looked fantastic in the process, making light work of his opponent and securing the finish as soon as it became available and presented itself to him...

Al-Silawi beat Van Suijdam via a 3 Round 30 - 27 UD decision at Middleweight and looked very comfortable in each round out striking and out working the naturally bigger Dutchman who carried power and had ability in BJJ on the ground, but tired after 1.5 Rounds and was happy to just last the distance it would appear at the end...Al-Silawi is quite the talent,, but I personally wish he had gone for the finish from the start of Round 3, instead of playing it safe, as the Dutch guy was definitely showing signs of fatigue and was there for the taking in my opinion


Apparently Mehmosh Raza beat Calum Murrie by a close Split Decision verdict and Tae Kyun Kim stopped his usually durable opponent, Mexican hardman, Arturo Chavez between Rounds 2 and 3 after delivering a 10 minute beatdown on his inferior fighting foe...The only Chavez who has Won a fight in the last week appears to be Mexican Boxing legend Julio Cesar Chavez, who at 57 Years old Won an exhibition bout against Jorge Arce, whilst his Son lost on the same fightcard via a Technical Points Decision, due to a cut that ended the contest... Amazing!! 🤔👏🥊👊👊🥊👍

Some of these fighters on today's Brave CF 43 MMA Fightcard are definitely UFC worthy, especially Akhmed Shervaniev, Tae Kyun Kim, Abnor Abdulkhozhaev, Kasum Kasumov and Al-Silawi and they all excelled on the evening...The special talent is Muhammad Mokaev, but at only 20 Years old, he still has plenty of time to develop and keep improving in an excellent lower league, which contains some excellent MMA Fighters, prior to challenging himself eventually with the sharks in the big league...Mokaev's power is still in the process of naturally improving, but he his already an all round fantastic fighter and prospect....Plus the other week, in Amir Khan's gym in Bolton, England, where hd appears to train, he made the legend Amir Khan tap out via a rear naked chokehold, with ease!! 🤔👏🏆🥊👊👊🥊👍