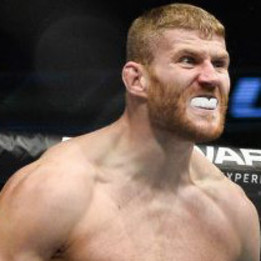 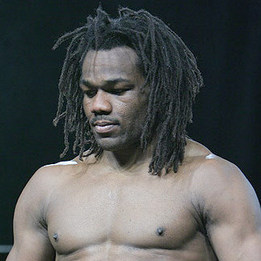 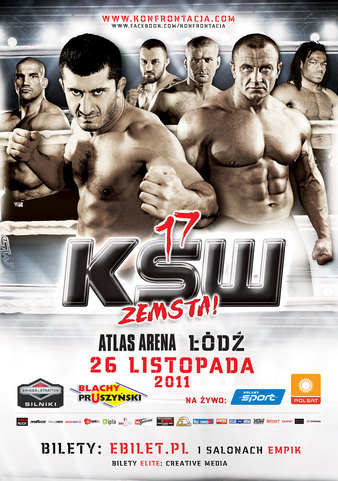 Sokodjou and Blachowicz took to the cage for one of the featured bouts of the evening for the KSW Light Heavyweight Championship. The fight was a rematch of their KSW 15 bout, which Sokodjou won by TKO.

Both fighters came out extremely aggressive, trading strikes in the clinch before Blachowicz pushed Sokodjou into the ropes. After a minute, Soko got a takedown and worked some punches from on top. The fight was stood up midway through the round and Blachowicz went on the attack with kicks to the legs and body before securing a takedown of his own against the ropes. Blachowicz passed to side control and landed some short punches but Sokodjou exploded to his feet and landed some punches in the ensuing exchange before Blachowicz shot in for another successful takedown at the end of the round.

Blachowicz went to work with a nice mix of high and low kicks to start the second round as Sokodjou waited for an opening. A stiff jab wobbled Sokodjou and Blachowicz clinched him in the corner and worked some knees before separating. Blachowicz landed a nice body kick then got another takedown. The fighters were stood back up and then Sokodjou tripped his opponent to the mat, but let him back up and ate a hard left hook for it. Sokodjou landed a couple of glancing blows of his own and stuffed a takedown as Blachowicz looked to be slowing first. Sokodjou landed a pair of leg kicks and a hook to end the round.

The fighters slowed their pace to start the third round, trading jabs before Sokodjou went low with some punches to the body and Blachowicz returned fire with a head kick that was blocked. Sokodjou closed the distance and took the fight to the mat, working from inside Blachowicz's closed guard. After the fight was stood up, Blachowicz dropped Sokodjou with a hard punch and followed up with some nice ground and pound, moving into side control to solidify his position before launching more punches at the defending champion's face. Blachowicz moved into the full mount, postured up and dropped some bombs, prompting Sokodjou to roll to his knees and shake his opponent off. For whatever reason, the fight was stopped and the fighters were given time to rest before resuming the final minute of action. Sokodjou worked from inside his opponent's guard for a few seconds before standing and allowing Blachowicz back to his feet. Blachowicz landed a takedown right before the bell but Sokodjou popped back up quickly.

The judges scored the fight for Blachowicz, giving him the decision victory and allowing him to take the KSW Light Heavyweight Championship and vengeance all at the same time.

“@InspireBookClub: There is no growth without change, no change without fear or loss, and no loss without pain. http://t.co/jBqESSKu pg 220”