Ricardo Lamas defeats Cub Swanson via Submission at 2:16 of Round 2 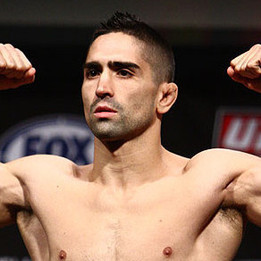 The seventh bout of UFC on FOX 1 featured Cub Swanson taking on Ricardo Lamas in the featherweight division.

Swanson landed some low kicks early, caught a low kick from Lamas, only to have Lamas acrobatically flip out of the situation. Lamas shot in for a takedown that initially appeared like it might be stuffed, but he was able to power through and plant Swanson on his back. Lamas worked hard to pass guard but found himself defending a deep guillotine choke from Swanson. Lamas, in serious danger, stood back to his feet with Swanson still on tight. Lamas finally popped free and the fighters playfully taunted each other. Swanson nearly had Lamas in a choke with his legs, clearly holding an advantage in the grappling department. An exciting first round, mostly controlled by Swanson.

Swanson missed on a big spinning back pick, Lamas landed a takedown but looked to be again outclassed with Swanson looking for submission holds. Lamas delivered some big elbows, mostly blocked by Swanson's forearms, and then in a surprising turn of events, Lamas deftly transitioned to an arm-triangle choke. Swanson, caught deep in trouble, had no way to escape and was forced to tap after an action-packed round and a half of fighting.

The official end came at 2:16 of the second round with Ricardo Lamas winning by submission. Speaking with Joe Rogan in the post fight interview, Lamas commented, "I wasn't tapping, he was going to have to put me out... my grandmother passed away a week ago today, and I'd like to dedicate this fight to her... Once I realized what he was going for and I get that a lot in the gym, I was able to lock in the arm triangle."

If you knew my homie, you would be shocked too. How are they gonna give him 3rd best Latino? http://t.co/A4xTpx4y

5 days and 13 minutes
after

So I heard this is the spot...I'll be the judge of that. http://t.co/ITXyW2kb

Thanks @danawhite and @ufc for letting me show my skills :)

4 days and 31 minutes
after

"@DerekBrunsonMMA: #GuyCode if another man ask you to put lotion on his back , just say no" Come on, its a hard place to reach!

@SMOOTHone155 I guess that makes us brothers!

Thanks to @Tapout for sponsoring me :)

Big thanks to @athletebay for sponsoring me :)

Today i feel......Humbled. Im ready to do it again(determined face on) @ufc

@MackDaMenaceMMA You caught a bad break. I hope they overturn it.

Back on the grind! No holiday break for me

@DerekBrunsonMMA Thanks buddy! Me and @clayguida will be there cheering for you.

Congrats to my boy @TimBradley_TDS on his big win Saturday. Pac Man next!?

Thank you @danawhite @seanshelby @ufc for the opportunity to fight for the best organization in the world again! #trulyblessed

Thank ou to my camps top notch and mma masters, my friends and family and fans, I couldn't have done it without all your help!

16 hours and 6 minutes
after

I promised I would fight my heart out. Sorry I didn't get the win :( @ufc #UFConFoX

4 hours and 26 seconds
after

21 hours and 39 minutes
before

21 hours and 51 minutes
before

After a very difficult day, I am in route to LA for my fight this saturday, time to focus, very driven, ready, ready for anything.........

I make sure my corner men get the royal treatment @ufc #UFCONFOX http://t.co/RS4hApcJ

"@Tubs4560: @CubSwanson Do you have a prefight ritual? Something you do the night before every fight?" Try to get a good night sleep :)

Nothing like watching Kung Fu Panda 2, to get my mind right :)

What's up @gunstorechris! I'm gonna tell everyone if they're ever in Vegas to stop by the @gunstore

I haven't driven out for a fight in like 5 years. Its been fun :)

Please follow @TimBradley_TDS! He is my favorite boxer and not just cause we went to high school together :) @ufc

Gotta do things for the kids :) http://t.co/x6IAwcJi

Good to see all my boys back home putting in work while I was away :) TRU-MMA http://t.co/XaAxFatt

So I plan on getting fat after my fight :)

I love that my family decided to throw me a B-Day Pizza party lol I'm the only one not eating. Same thing last year. #YouKnowiCantEatThat