Cain Velasquez defeats Brock Lesnar via KO/TKO at 4:12 of Round 1 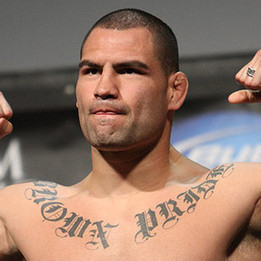 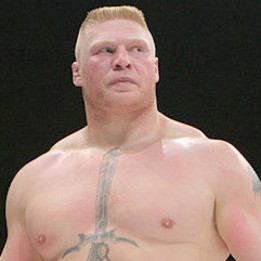 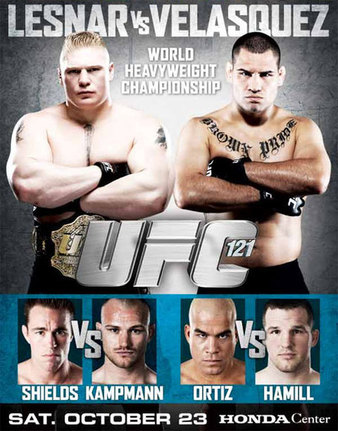 The main event of UFC 121 was one of the most highly anticipated heavyweight fights in years as Brock Lesnar defended his UFC title against top contender Cain Velasquez. Lesnar's enormous star power drew mainstream and casual fan interest, while serious MMA fans salivated over getting to see the talented and well-rounded Velasquez match up against the behemoth champion.

Closing oddsmaker lines listed Lesnar as the slight favorite over Velasquez, yet many fighters and expert observers were predicting Velasquez to become the new champion. The UFC, looking for a marketing angle to generate interest in the lesser known challenger, hyped Velasquez as having the chance to become the first ever Mexican heavyweight champion in mixed martial arts or boxing. Velasquez, California-born but of Mexican heritage, drew significant hispanic fan support at pre-fight press events and in the arena on fight night.

Lesnar outweighted Velasquez by 20 to 30 pounds (depending on the exact amount of weight he cut the day before to reach the 265 pound limit), and appeared significantly larger as the two fighters met in the center of the Octagon to receive their final instructions from referee Herb Dean.

As soon as the first round started, Lesnar stormed across the cage and threw an array of power shots including a flying knee. It appeared his strategy was to immediately overwhelm Velasquez with his size and aggressiveness, and he may have momentarily succeeded, landing cleanly on at least a couple of blows. Velasquez wildly returned fire and the opening few seconds were more of a brawl than anything else. Velasquez, who later commented that he quickly realized he was not following his gameplan, was able to separate and regain his composure.

Lesnar barreled into Velasquez shortly after and scored a big takedown, planting Velasquez on his back. Fans of the challenger had to have been nervous at that moment given the damage that Lesnar is known to be able to inflict on the ground. Showing his incredible resourcefulness, however, Velasquez was able to hip escape and almost immediately get back to his feet.

Once back to the standing position the fight was entirely controlled by Velasquez. The challenger picked his shots carefully and was too quick and technical for Lesnar on the feet. A hard blow sent Lesnar stumbling and rolling across the mat in a memorable scene, as the bewildered champion tried to find a way to get away from Velasquez's pressure. There would be no such escape. A swarming and relentless Velasquez continued to fire strikes from every angle, opening a deep gash underneath Lesnar's left eye. With blood flowing from the cut and a beating being administered from Velasquez up against the fence and on the ground, Herb Dean had finally seen enough and stopped the contest at 4:12 of the action-packed opening round.

Cain Velasquez, the newly crowned UFC heavyweight champion, thanked his fans and supporters in both English and Spanish, while Brock Lesnar was humble in defeat and vowed to improve his skills and return.

Slick promo video with a hispanic flair shows the dueling personalities that faced off for Lesnar vs Velasquez.

In this video for ESPN Magazine, Cain Velasquez discusses the wrestling techniques he drilled in order to get up from his back in the Brock Lesnar fight.

Watch this post-fight interview with Cain Velasquez as he discusses the surreal feeling of defeating Brock Lesnar.

After defeating Brock Lesnar for the UFC Heavyweight Championship, Cain Velasquez appeared in this video segment on the George Lopez Show.

Watch this video interview with top contender Cain Velasquez as he talks about his fight against Brock Lesnar at UFC 121.

Watch this video inteview with UFC heavyweight champion Brock Lesnar as he talks about his fight against undefeated Cain Velasquez at UFC 121.

Just finishing up tasting food with Michelle for our wedding. Nice to finally get to plan the details

Me & my team with my UFC Heavyweight Belt!: Me with my management, Zinkin Entertainment… http://goo.gl/fb/ROF8d #fb

Yes we did! Aka & Zinkin! Thank u RT @DaveCamarillo: Last tweet for tonight: thank you AKA! We did it!

7 hours and 2 minutes
after

7 hours and 58 seconds
after

About to pull up at after party at Ecco in about 10 mins. Had lots of press after fight so thanking fans or their patience!

4 hours and 36 minutes
after

Thank you to all my fans that were behind me! We did it!!! This belt is for all of us!!

3 hours and 38 minutes
after

Get to Ecco in Hollywood for Cain's After Fight Party tonight! Team AKA will be there & @PhilMrWonderful- MGMT. http://plixi.com/p/52535224

RT @VCostley @DCBROCKLESNAR Good luck tonight and KICK SOME ASS!!!! Were rootin for ya here in Minnesota.

8 hours and 51 minutes
before

RT @joshuajackson yo, everyone in my national guard unit are getting together to watch you fight. Good luck and knock em dead man.

8 hours and 52 minutes
before

8 hours and 52 minutes
before

10 hours and 24 minutes
before

23 hours and 55 minutes
before

23 hours and 59 minutes
before

RT @JeremyHeavyMMA When @heavymma gets to 1,000 followers, we're going to give away a @dcbrocklesnar @UFC 121 walkout shirt. RT this to win!

RT @dethrone: doors open 11:30, film at noon. free shirts. @gilbertlmelendez and @migueltorresmma will be there.

RT @TravisDukeman @DCBROCKLESNAR Its #BROCKTOBER BABY! Cant wait for saturday man. "Its TIME!" to prove the haters wrong once again!

RT @dja17 ‎"No, It's wintertime, I'm going hunting, and I'm from Minnesota. It's that time of year. We just grow beards." - @DCBROCKLESNAR

RT @LOGANBANK5 @DCBROCKLESNAR My 28th bday is this sat ...can I get a RT from my favorite wrestler/fighter...seriously you rule!

RT @johnson652 @DCBROCKLESNAR Can't wait til sat when you prove once again that you're the toughest s.o.b in the world. #fearthebeard

Check out this new video! http://bit.ly/aQH4vz

Join me for my Official Fight After Part @ Ecco: Come join me at my Official After Fight… http://goo.gl/fb/vuIhk #fb

I want to thank all my fans that came out to the #UFC 121 Rally yesterday at Olvera St. Plaza!! It was awesome to feel your support!!

Here are some pics from ESPN shoot: I am shooting ESPN “Sports Science” show to promote… http://goo.gl/fb/DQ1wi #fb

Go to whosright.com and vote on my fight .