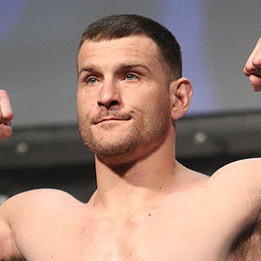 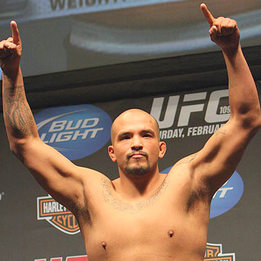 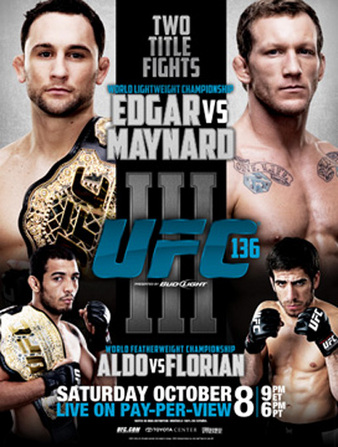 Miocic came out and quickly landed a pair of low kicks. Another, harder low kick from the undefeated Miocic. Miocic tripped Beltran with a single leg attack but couldn't hold Beltran down. The pair had some good exchanges and neither landed any devastating blows, but it was Miocic who connected more frequently, especially with low kicks. Beltran landed a nice right hand in the final seconds of the round but generally had difficulty finding his range and timing.

Miocic took Beltran down early in the second round, at first stood over throwing punches and then moving in closer to side control. Beltran did a nice job of scrambling out and back on the feet pressed forward slugging away towards Miocic. Miocic fell to the ground and Beltran unloaded with a good flurry of ground and pound. Miocic looked composed as he escaped from his back and was up to his feet. Beltran did an excellent job in turning the fight into a slugfest, landing good strikes in close and in the clinch. Miocic connected on a big right hand late in the round, but Beltran's chin served him well as he fired back.

The judges scored the bout 29-28, 30-27, and 29-28 all in favor of the winner by unanimous decision, Stipe Miocic. Speaking with Joe Rogan in the post-fight interview, Miocic commented, "He's got a good head... I watched all of his fights, he's got a head man... That's where my inexperience took place [when the fight turned into a brawl]."

@RossTheRealDeal check out www.loyloy.net @LOYLOYctac he is in PB he is my homie and has done all my work

been hit up 3x by @ufc fans today out n about (cool in itself) and they all say "we appreciate the way you fight for us!" #awesomeenergy :)

My kids are the best therapy. They could care less what i do for a living. They love me no matter what!

@GHurricane so you think your cooler then me because you fought in Japan and than won a MC hammer dance (cont) http://t.co/exTo3F6X

I just wanted to thank everyone who came or who watched the fight on Facebook... I really appreciate all the (cont) http://t.co/Rs3Riw9O

Up and headed to the gym today. The time to correct my mistakes from last saturday is NOW! lets get it!!!

On the plane SD bound with @mbsoupinc @ericdelfierro THANK YOU @UFC @DANAWHITE and the PEOPLE OF HOUSTON!! it was a great fight week!

Back to the drawing board. Thanks to the fans and to the haters keep on cuz im not going anywhere.

Chillin in the rm with @nicktheghost @mbsoupinc @SutYadPalung watching Texas vs OU i think today ill cheer for Texas! #wheninrome

Its a sad day in the #RAIDERNATION RIP HALL OF FAMER 3x Super Bowl Champion Al Davis. But it is also the dawn of new beginings!

"@sportsnutphan: @mexicutioner760 im going to send an envelope to alliance. is there anyway i could get a signed photo?"yes send it!

Thanks to @trainingmask for having me in their booth today! It was a great time with great people!

Great night catching up with all @ufc #Familyfriends&peers now in room watching jersey shore.Btw The fans in Houston are out in FullForce!!

@RossTheRealDeal yo ross @travisbrowneMMA @PhilMrWonderful @TheDomin8r already got food &im goin in 30min so every man for himself :(

On my way to pick up @Helen_Beltran then @ericdelfierro arrives tonite @SutYadPalung gets here tomorrow then 1 day til ITS TIME!!

Plenty of correct answers by my followers but still no winners here IN HOUSTON! @headrushbrand @clinchgear stuff waiting to be won!!

First 2 fans that can find n tell me the artist playing in background in bowling alley during Day 2 vlog wins GO!!!

The giveaways are goin down around 1:00pm Texas time! You gotta watch the day 2 vlog for the answer to the giveaway question!

"@MPM_21: @mexicutioner760 thanks for taking a pic with my son today u really made his day!!!"no prob man! Thanks for the support

So just realized that our hotel doesnt have spike tv!? @ufc whatup with that!? No ultimate fighter for us!

Sitting down for "steak night" at Front Porch Pub in midtown houston. 15$ for 16oz ribeye sign me up!

@AlexTheMauler in my rm gonna get a run in later then chill. You wanna roll a lil tomorrow? ill dm u my room#

Yo @AlexTheMauler where u at?

Yo who knows the weather report for H TOWN?

Yo @mikeohmike check out Athena smashing during muy thai sparring in my Vlog! #futurechamp

@SugaRashadEvans i really like when my lil relatives ask, "why did you lose joey?" Hahaha