Jon Jones defeats Maurício Rua via KO/TKO at 2:37 of Round 3 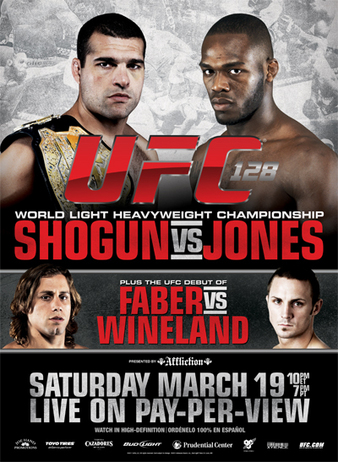 Twenty three year old challenger Jon "Bones" Jones put on one of the great title performances in UFC history by dispatching the standing champion, Mauricio "Shogun" Rua, in a three round virtuoso display of controlled fury and fighting artistry at UFC 128. A bout Tapology fans were picking in favor of Rua and professional oddsmakers were giving to Jones by a narrow margin ended up a complete beatdown. Jones won every second of the fight, alternating between smothering and overwhelming the champion in a performance as notable for its patience as for its aggressiveness. On a night in which Jones became the youngest UFC Light Heavyweight Champion ever, the talk leapfrogged his anticipated initial title defense against Rashad Evans, into Jones's pound-for-pound status and all-time legacy. Clearly, at UFC 128 a new star was born.

Round one began with an extraordinary display of striking variety from the challenger. Jones began with an immediate flying knee, followed by a left leg head kick, and then a spinning heel kick to the liver, all in the opening seconds. At barely the 0:30 mark, following the briefest of tie-ups Jones used a head clinch to drive Rua down to the Octagon canvas and land on top of him. Less than a minute in the champion already looked like the action was too fast for him to keep up. Jones soon passed to half guard following a failed triangle attempt by Rua, and looked to sink in the same topside choke that he used to put out Bader. Rua defended well, but as Jones began to calmly attack with elbows and head pressure, Rua looked uncomfortable and increasingly tired fending off the onslaught. Rua attempted a sweep from half guard unsuccessfully near the 2:45 mark and was stymied. Increasingly Rua looked stuck, and Jones increased his attack with punishing elbows to the body.

Matters worsened significantly for Shogun in the final ninety seconds of the round, as he struggled back to his feet and was immediately hit with the most damaging flurry of the fight, a combination knee to the body, knee to the head, heavy left hook to the head and two more punches down the pipe. Shogun was never the same after the devastating combination. He advanced on Jones but his punches had lost all sting, and Jones picked him apart for the final minute with a grab bag of kicks, knees and punches up and down the body. Rua ended the round glassy eyed and wobbly.

Round two proved a continuation of the first. Jones opened with three different kicks to three different areas, then hit Shogun with a huge spinning back elbow against the cage fencing that was inches from being a fight-ender. Shogun threw back but was unable to reach the challenger with a series of lunging overhands. Near the halfway point of the round Shogun threw his first leg kick of the fight, and Jones immediately took him down, then followed up with a big shot to the face inside Rua's guard. Jones began to have increasing success with elbows inside of Rua's guard, and Rua started to look seriously beaten up. The round ended with Rua helplessly attempting to sweep Jones from half guard as he ate punches and elbows, followed by a late attempt at a leg lock by Jones and a hammerfist to the champion for good measure.

What proved to be the final round began with Rua attempting to find some momentum on the feet, but once again he was forced to reach too far with his punches in an effort to find Jones. After a brief scramble following a missed Rua leglock, Jones seized top position again and resumed his half guard assault. His punches began to find their mark with increasing frequency. After a series of monstrous elbows on the ground turned Rua over, Rua staggered to his feet and Jones opened up his attack. Rua stumbled back toward the cage. Jones advanced with one final left hook to the body and a knee to the head that crumpled the champion as referee Herb Dean stepped in to stop the fight.

Bad Boy goes behind the scenes into Mauricio "Shogun" Rua's training camp to see his preparation for his UFC 128 title defense against Jon Jones in this video.

Showing off her improving portugese skills, Karyn Bryant talks to Mauricio "Shogun" Rua about his new UFC 128 opponent, Jon Jones, after the change was announced at UFC 126 in this video for MMA Heat.

Im calling it the bones buckle and yes I am RT @blacknuts77: @Jonnybones Hey Jon you bringing the "Bonethrone" with you to the show tonight?

1135pm RT @jaimediazle: @Jonnybones Hey What time is the show ??

You gonna buy me a ticket?RT @jmh208: @Jonnybones when u going to come see us down in Mississippi?

Whats up bra RT @tjprice91: @Jonnybones I know u c me homie holla back

LolRT @CurtisKnowsTech: @Jonnybones @danawhite "All Jon Jones needs to do next is deliver a baby on the way out of this building."

Lol yesRT @Pappadustin: @Jonnybones your first time in LA as the Champ??

Too long RT @caseyphelan: @Jonnybones The Belt that Bones Built.

Lol im going to have to turn my cell off soon but im thinking about naming the belt any suggestions?? Ill retweet the good ones when I land.

I felt fine, ready for 5 RT @drslimbizzle: @jonnybones how tired were you really in the shogun fight?

No it won't, Im nothing like Rampage RT @slickukd: @Jonnybones this is going to be like rashad v rampage come fight night, cant wait

He likes to hear himself talk, Ill use it as motivationRT @KaliebGibson21: @Jonnybones what are your thoughts about Rashad callin you Judas?

Gate 46 come say whats up RT @davvon01: @Jonnybones please tell me ur in terminal 8 because I would love to meet you

hanging at the JFK Airport waiting for my flight to LA.

There's no place like home, I love yall tooRT @GoingPlacidly: @Jonnybones I'm in the 607....we love Jonny Bones here!!

I'm actually in Manhattan this morning RT @Bigjame26: @Jonnybones are you in the 585?

Be a TUF coach, fight in madison square garden.. theres two RT @jshpainter: @Jonnybones what other goals are on your list?

Walking down any street in any city knowing that you're the champion of the world :-)RT @jsmiller22: @Jonnybones (cont) http://tl.gd/9efaat

Lol next is the SUPER SHOE RT @colefrank: @Jonnybones.so whats next?have u picked up a cape and some (cont) http://tl.gd/9e7651

NopeRT @jrohr403: @Jonnybones did you and shogun win fight of the night??

GSP, he simply has more toolsRT @adamlib: @Jonnybones hey Jon who do you think will win gsp or Jake

They're getting better, I've been practicing using my reach RT @erikcharlesTM: @Jonnybones Your hands have gotten pretty sick! Ha.

Just didn't expect him to do that on my big night RT @Josh_YoungMoney: @Jonnybones how come you looked so upset (cont) http://tl.gd/9dgofp

Naw,it cant be too scary RT @blowtorch19: @Jonnybones are u nervous at all about doin the tonight show?

Just made it to Ithaca!! Can't wait to just sit on my own bed

I think I fought a "ready" Shogun, He said he was RT @saliba1983: @Jonnybones were u expecting a tougher shogun? Think he was 100 percent?

My hand's totally fine, it was just a little swollen when I took my glove off RT @epicfail914: @Jonnybones how's the hand champ?

Just doing my part RT @LenonEf: @Jonnybones youre an inspiration to many! #greatness

Heavy! I was shadow boxing with it on last nightRT @smokepac: @Jonnybones how does that strap feel champ?

:-) I receive it! RT @DoloMojo: @Jonnybones you are a monster with a super hero heart champ for the next 10 years

Besides everyone calling me champ, I can't really tell yet RT @brobiden_01: @Jonnybones Now that you have won (cont) http://tl.gd/9dg2ve

Heading to NY for now RT @DerekBrunsonMMA: @Jonnybones are you going back to Jacksons or NY

I am but its not really hitting me that I've won the belt, I really don't feel very different RT @superjt11: @Jonnybones you excited?

Im feeling great! Just riding home with the fam bam, thought I'd check in with you guys

I wanted to thank you all for being a witness! Without you guys support what would our sport be? So cheers to the @UFC/ #MMA NATION -JBJ

Tweet me a picRT @BryantSherburne: @Jonnybones lookin like an animal on the front page of the Binghamton Press

Lol start by giving a complete stranger a big smile RT @Michael_Colvin: @Jonnybones I'm feeling like I need to do some good today!!

So how's everyone feeling today?

Thanks for all the love this morning guys! My mission is to rep our sport in the most positive light w every opportunity I have

He was like yeah man I brought it from the mall, I don't think he even had a clue what the UFC was RT (cont) http://tl.gd/97qmu4